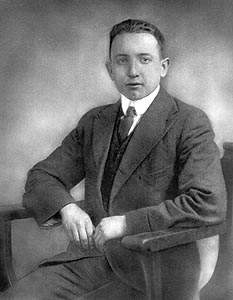 Pvt. Samuel Tresser, 1897-1918, for whom Tresser Blvd. was named, was killed in action, south of Fismes, France, on August 24, 1918. This was known as the Battle of St. Mihiel. He is buried in the American military cemetery near there. He enlisted in the old 7th Company, Connecticut Artillary Co., May 13, 1915 and served until his death with this organization, which became Battery D, 56th Coast Artillary, on being Federalized.

Samuel was the son of Mr. and Mrs. Morris Tresser and an older brother of Michael Tresser, who was a long time Republican member of the Stamford Board of Representatives.

Do you have photographs depicting the Fairfield County Jewish community? If so, please consider either donating them to us or lending them to us for scanning. After scanning, we will return the photographs to you by mail. For more information or to purchase digital copies please contact the Society.