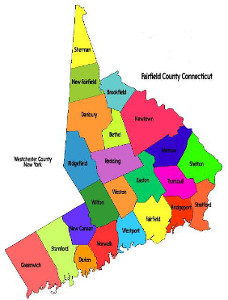 
The Jewish Historical Society of Fairfield County strives to build intergenerational community through sharing and preserving Jewish history, heritage, and culture. We tell the story of the human experience through Jewish eyes.

The History of Antisemitism
presented by Steve Goldberg,
Co–Director of Education of HHREC (Holocaust and Human Rights Education Center) 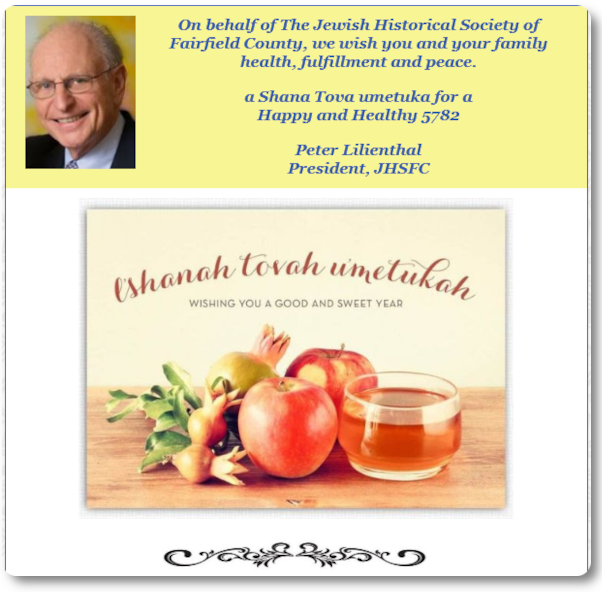 The Jewish Historical Society of Fairfield County has exciting plans for the New Year. We are developing programs to reach out to the community to share our expertise gained since our 1984 founding in Archive Development and Oral History Interviewing techniques. Join our mailing list to keep up to date . . .

Musings from My Heritage
by Larry Ginsberg

The High Holy Days at present are days of contemplation, days when we must determine what we must do to make our world a better and more humane place, and days when we must seek forgiveness from G-d and those we may have offended in the past year.

The following article by Lev Poplov brings us back to a time when the very future of the existence of Judaism was on the line, the Holocaust. It was a time when Jews in Nazi captivity had to determine how to remember the High Holy Days and render them meaningful in the light of their desperation.

Stamford Arts and Culture Commission designated JHSFC as a winner of a grant for production of a travelling exhibit, "It Happened Here."

According to Eva Weller, grant project manager, "The JHSFC will draw on its more than 5,000 photographs and over 250 oral histories in the design of this exhibit, which will consist of seven pull-up panels (each at 33" width and 78" height) to cover such topics as immigration, civil rights, and women's accomplishments. Even with this grant, we need your help to bring this exhibit to its full completion. Please consider donating to this project."

Mayor David Martin said in a release "Stamford's arts venues and programs have provided immense value to our community this past year, and I am glad we can continue supporting the work they provide to our residents. I know I look forward to many of these programs as defining experiences to Stamford's cultural identity and I look forward to their work this year." 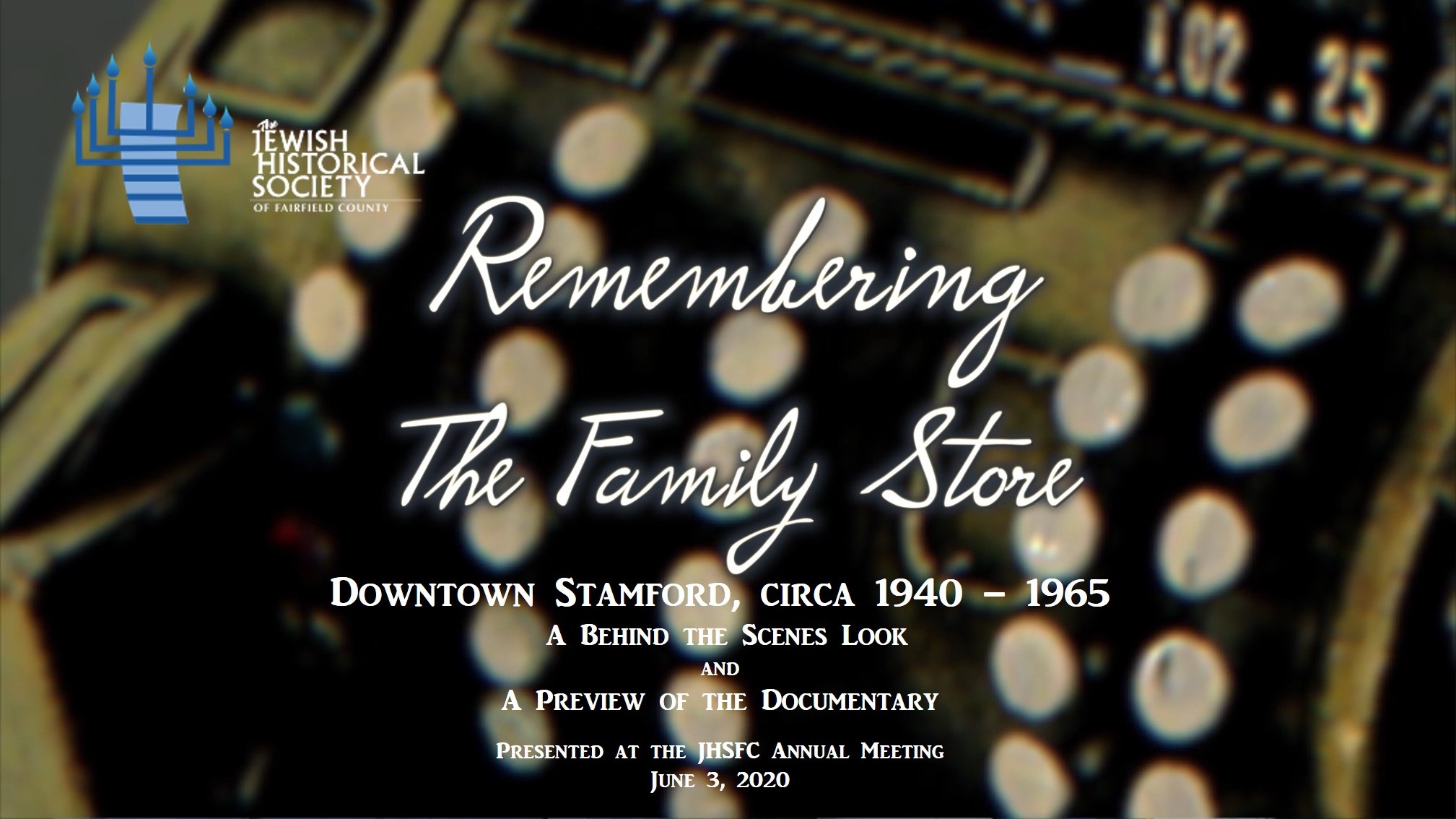 The Jewish Historical Society of Fairfield County announces that the presentation of the Making of Our Documentary is now available to everyone on YouTube. Even though the documentary itself is still in production, you can see the amazing three-minute trailer and get a good idea of what the documentary will be like.

If you missed the live production or want to see it again, it is now available at the link provided below. You can discover (or re-discover) how the documentary originated, the personal connections of Lester Sharlach, Gail G. Trell, and Steve Karp, and hear how the award-winning filmmaker, Marge Costa, has created the production. Enjoy and please share with anyone you know who would want to see it. 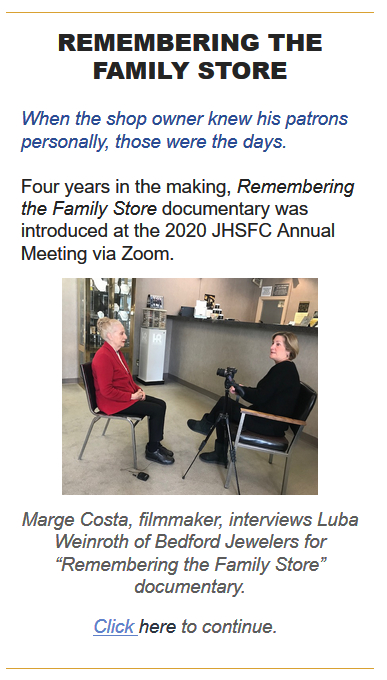 A Message From the First Aliyah 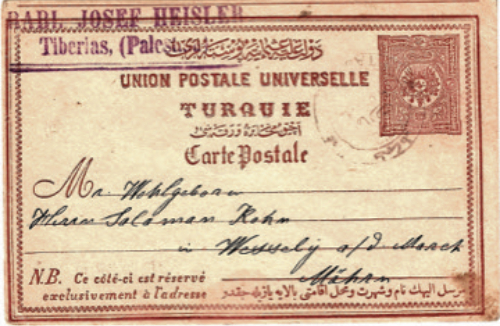 With Yom Ha'atzmaut right around the corner, it seems appropriate to talk about the establishment of the modern State of Israel.

Believe it or not, you may have something historic amongst your own family heirlooms that relates to the founding of the country.

This postcard, part of my own collection, dates from April 22, 1899. It was written in both Hebrew and Yiddish on Ottoman Turkish postal stationary and sent by Rabbi Josef Heisler from Tiberius, Palestine to his supporters in Germany. We may not associate modern political Zionism with this early date, but it was the era of the 'First Aliyah,' sometimes known as the 'Agriculture Aliyah' (1881-1903), fueled by antisemitism and pogroms in Europe.

As you can see, besides asking for continued support, agriculture was an important concern as expressed in Rabbi Heisler's letter: "My beloved friend, how can I even express to you how helpful and vital your support for our family was? You have made us survive and brought us to this day. It was particularly auspicious as Israel is being plagued by horrible locusts which has covered the land and destroyed so much of our agriculture and has created worry about the future. May G-d have mercy of the land and its inhabitants."

This is a good time of year to appreciate the intrepid, early Jewish immigrants to Palestine. They endured many hardships and surmounted numerous obstacles (and, yes, even locusts) so their descendants could gain independence for the State of Israel some 50 years later. 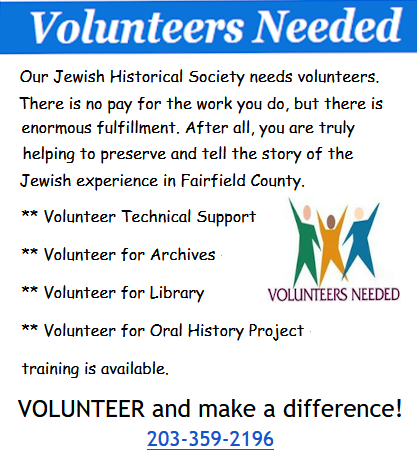 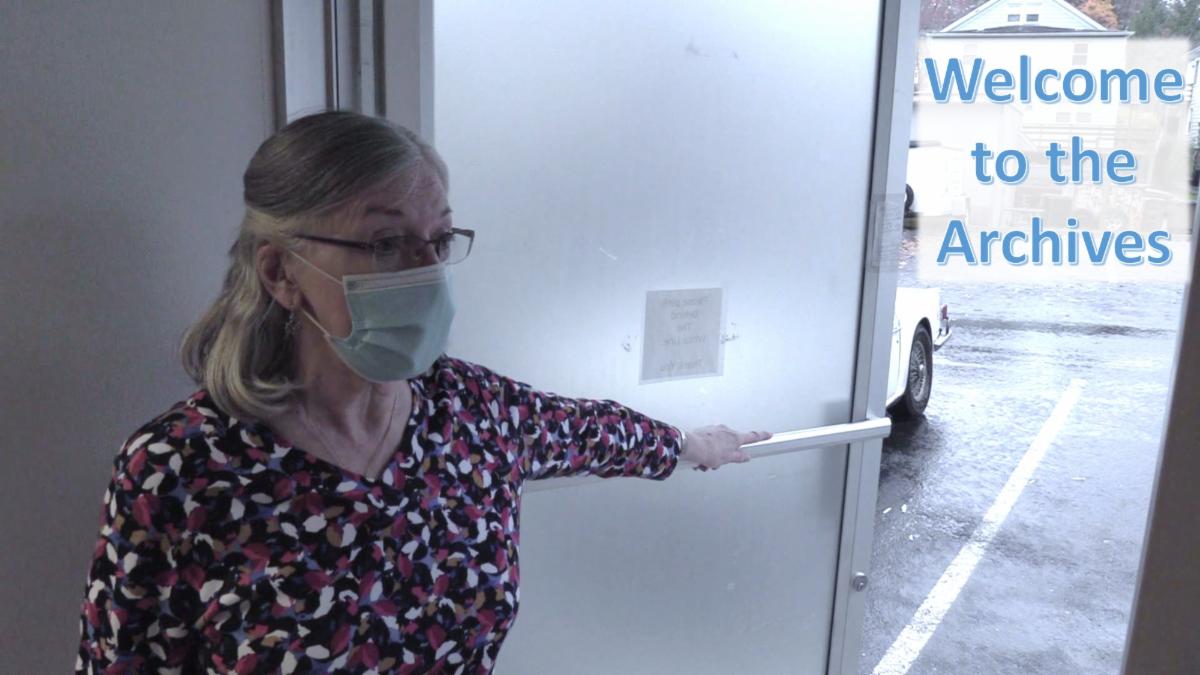 The Jewish Historical Society of Fairfield County is pleased to announce that the Archives will reopen commencing June 1, 2021.

Have you ever wondered what we have been collecting for 40 years in our Archives?

Do you want to know about our exciting current projects?

Join us for a Virtual Discovery Tour of the JHSFC Archives.

Click SHOW MORE on our YouTube Channel and you can jump to a specific chapter listed here: 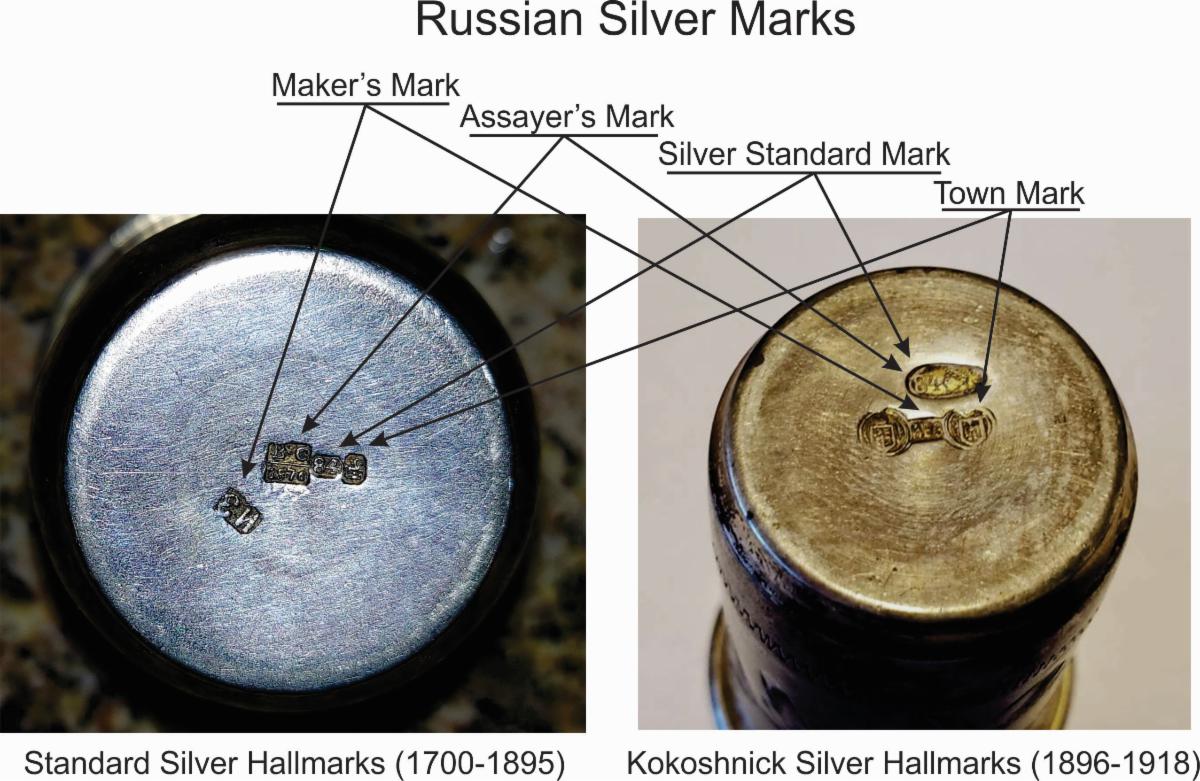 The few items our ancestors brought with them from 'the old country' tells us a lot about their values and priorities. With its importance in Shabbat and Passover observance, a diminutive kiddush cup might be the only object of value portable enough to make the journey. But what information can we obtain from the tiny, enigmatic hallmarks on the bottom? Turns out, a lot!

These are two kiddush cups belonging to the family of Dr. Elissa Kaplan, immediate Past President of the Jewish Historical Society of Fairfield County. The first is marked with the standard Russian assay system established by Tsar Peter the Great in 1700. It includes a maker's mark, assayer's mark, silver standard mark and town mark. We can tell that this cup was made by the famous silversmith, Ivan Zakharov ((и3), who was active in Moscow from 1856-1896. This particular cup was made in 1876 in Moscow according to the assay mark and town mark depicting St. George slaying the dragon. Its silver purity is 84 Kolotniki (a unique Russian measure), or 87.5%, a bit less than sterling silver. The assayer was Viktor Savinkov (BC).

The second cup is marked with Kokoshnick hallmarks (named after the traditional headpiece being worn by the woman in the assay mark), established by Tsar Nicholas II and used from 1896-1918. There should be tiny initials to the right of the woman's head (right behind her neck) corresponding to the assayer. It was made by another famous silversmith named Israel Eseevich Zakhoder (и3). He was originally active in Moscow but moved to Kiev, Ukraine, in 1892 which is where this cup was made. Because this type of mark was instituted in 1896 and Zakhoder ended his production in 1907, we can be certain it was made between those years in Kiev. Its silver content is also 84 Kolotniki or 87.5% pure silver.

Your family heirlooms will often come with stories about their history and meaning. But sometimes, the items themselves can also tell a compelling story about the past. 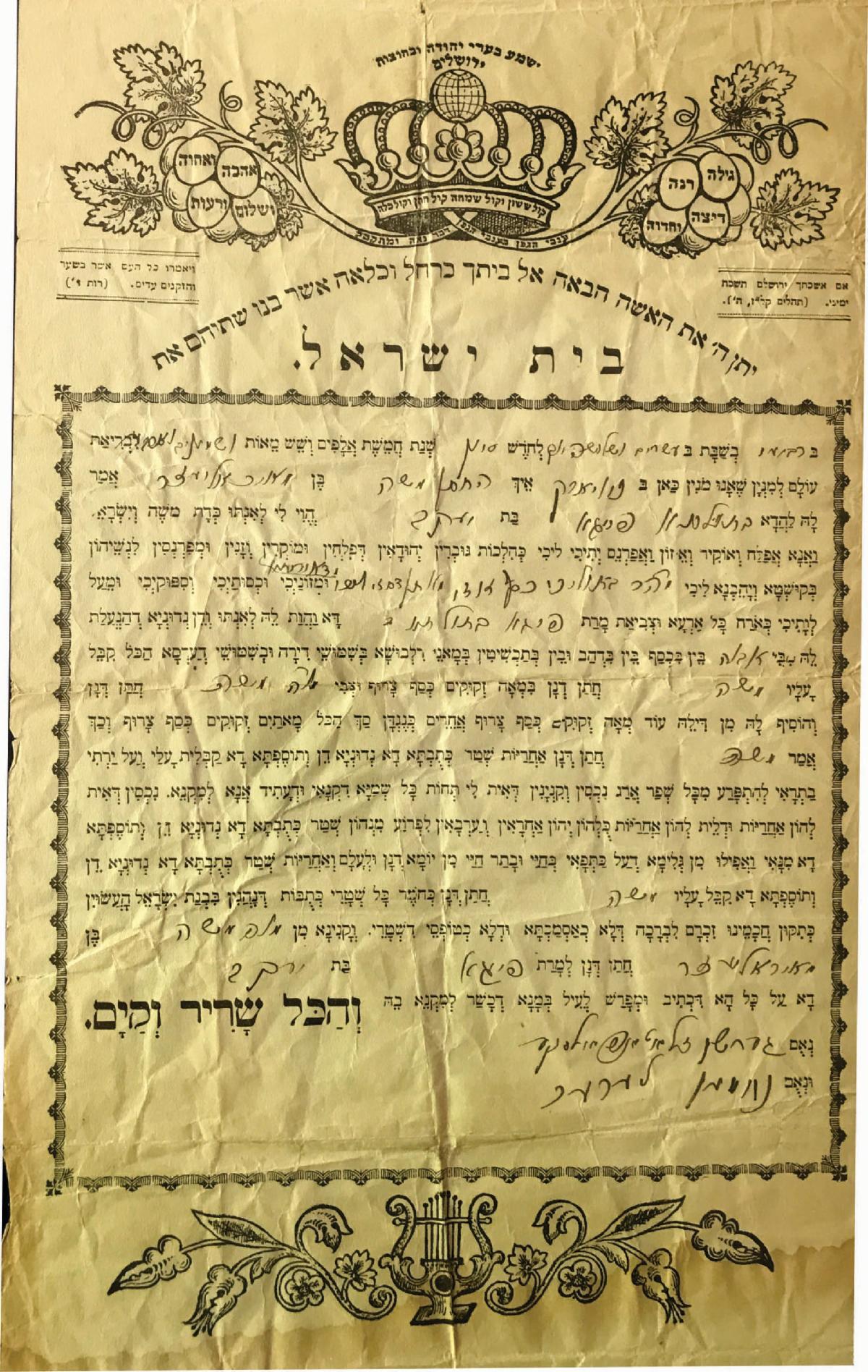 As we slide into spring, the number of weddings steadily increases topping out in June. When it comes to a traditional Jewish wedding, the Ketubah , or wedding contract, is an essential component. The formula of the Ketubah , reputedly dating back to Simeon ben Shetach, c. 140-60 BCE, outlines the rights, responsibilities and obligations of the groom in regard to the wife. Though it may look like Hebrew, traditionally the Ketubah is written in Aramaic, the lingua franca of Jews in the 1st century. Signed by the bride and groom as well as witnesses, it is read aloud during the wedding ceremony under a chuppah , a canopy held up by 4 poles. As always, the text v'hakol sharir v'kayam — "all of this is in force and validated," the legal formula validating a binding contract, can be found in large letter toward the end of the document.

This Ketubah is from the 1920's. Unlike some of the more fancy and artistic wedding contracts seen today and throughout history, this was a very modest example printed on inexpensive paper. As such, they can degrade over time if not properly conserved. You may have documents like this in your own family archive which may need attention so they can last through the generations.

A Forensic Approach to
Holocaust Memory and Education 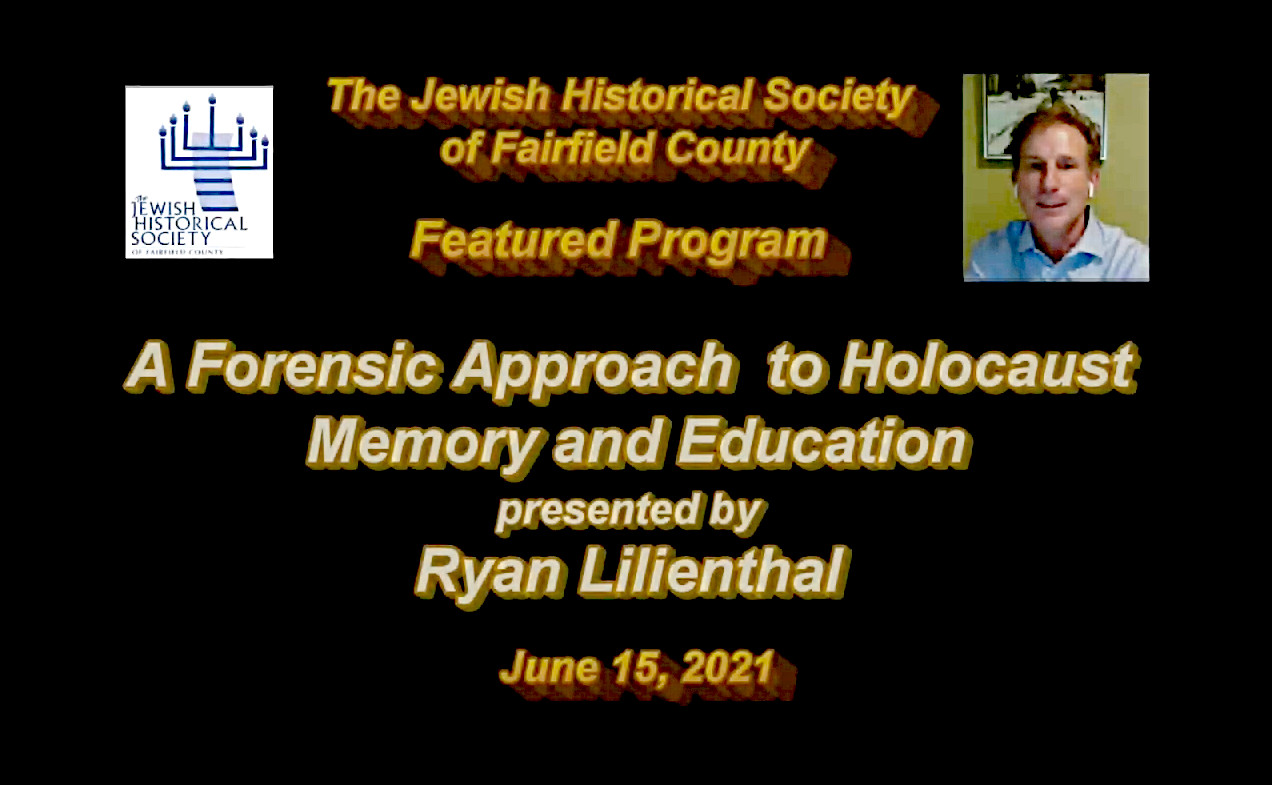 See how you can use forensic analysis techniques to uncover your family history. Join the Jewish Historical Society of Fairfield County as Ryan Lilienthal tells how he uncovered his family story.

Ryan engages his audience in a blueprint process to harness the vast array of increasingly available Holocaust-related archives to piece together the lives of Holocaust victims. In our digital age, primary source material, including video testimony, letters, photographs and institutional and government documents are at our fingertips. The presentation shows how we can deploy our own critical analysis skills to reveal our family history by following the links to the history they left behind. 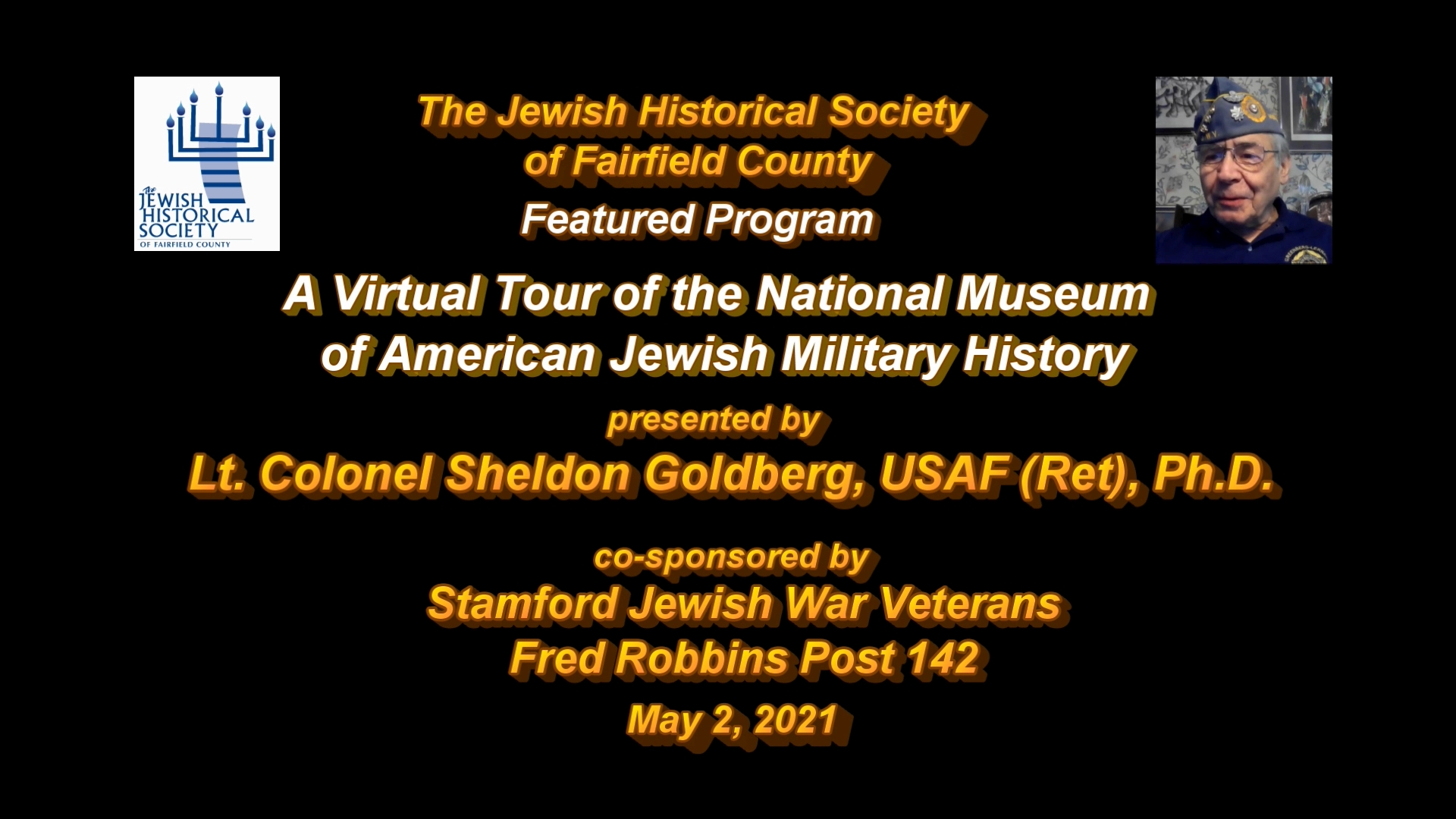 Did you know that there is another national Jewish museum in Washington, D.C. besides the Holocaust Museum?

Did you know that Jewish Americans have played an important role in the defense of the United States since pre-Colonial times?

The tour covers many hidden treasures of the museum, including The Hall of Heroes: American Jewish Recipients of the Congressional Medal of Honor, Women in the Military, GIs Remember Liberating the Concentration Camps, and The Life and Career of Commodore Uriah Phillips Levy (1792–1862).

The program was co-sponsored by the Stamford Jewish War Veterans Fred Robbins Post 142.

You can also view the NMAJMH video tour separately from the JHSFC program at the NMAJMH YouTube channel.

In Rachel Beanland's debut novel, the story focuses on a tragedy that the Jewish Adler family suffers in 1934 Atlantic City. The Adlers struggle to conceal the drowning of a beloved daughter for fear that her pregnant sister, Fannie, will lose her baby. Beanland writes of this tragic death and the tension surrounding this secret from the points of view of seven main characters in a tender, yet probing manner. The reader gains great insight into each character's nature. The range of their backgrounds and relationships, including that of a young refugee border from Nazi Germany, brings another dimension to the story.

Dr. Judith Katz is a featured Book Talk presenter. She is an award winning educator with a long and distinguished teaching career. She is a gifted story teller who brings her dynamic presentational style and literary analysis skills to this thought-provoking novel.

In the Featured Program, Dr. Laura Ping presents a richly detailed analysis of New York's Lower East Side immigrant life in the early Twentieth Century. She describes the "sweatshop" working conditions, which fueled the Lower East Side's growth as the center of the nation's garment production. She highlights the 1911 Triangle Shirtwaist Factory Fire...a pivotal moment leading to the workplace reforms that followed.

Michele Esterman and Rhonda Ginsberg share the personal stories of relatives who were caught in the fire.

Musings from my
"haunted" Hermitage 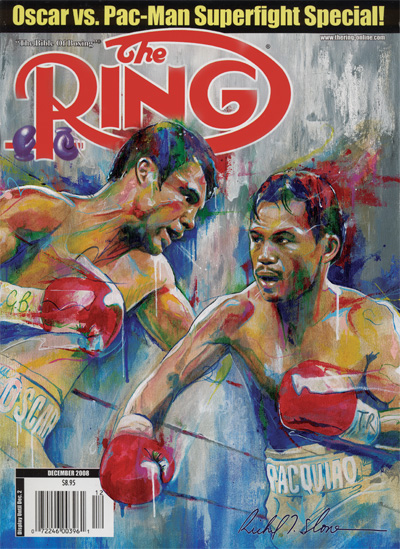 January 16, 1964: Ansonia's own Pinky Silverberg, former NBA World Flyweight Champion who was "robbed" of his title died today at age 59.

He was known for fighting the top Flyweights and Bantamweights (when he was no longer able to make weight as a Flyweight) of his era including Dark Cloud Bradley, Kid Chocolate, Panama Al Brown and Midget Wolgast. He was survived by his wife and two children.

↪Click HERE to read
the rest of the story.